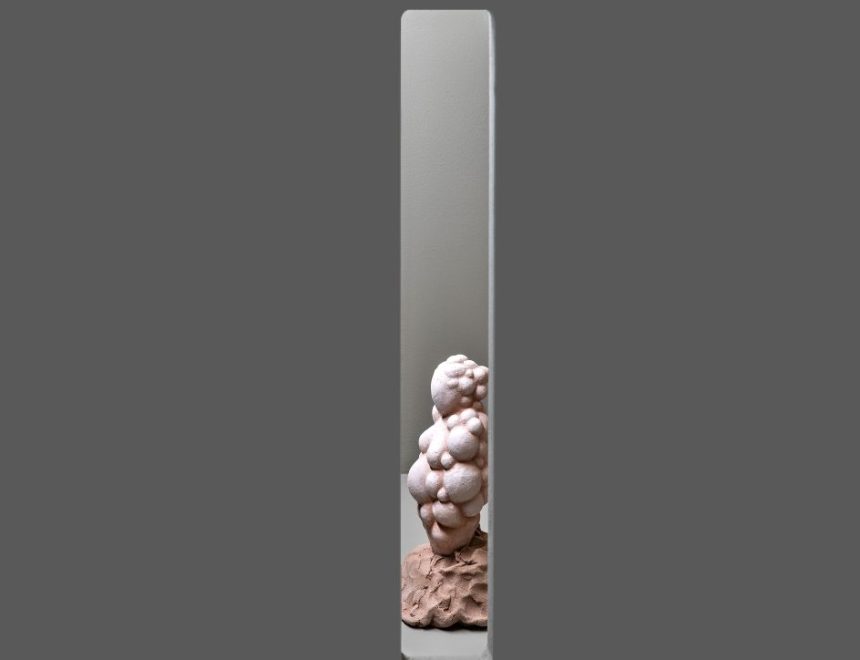 The exhibition Mar Arza. A pesar / A saber / A tientas (In spite / In short / In darkness) is a project specifically for Gallery 3 of the IVAM. Conceived as an installation, it brings together archaeological pieces displayed in a dialogue with works by Julio González and those of the artist.
Within this framework, a book has been published in which Anna Manubens and Andrea Soto Calderón propose further reading, actual dialogues and poetic journeys based on the artist’s proposal. This supporting structure works because it does not match in the case of Manubens and Diosas caídas: matriz, maternidad, materialidad at the Soto Calderón. We now invite you to the presentation of this publication, and to continue broadening dialogues and viewpoints.

“When Mar summoned me to her studio to talk about the exhibition, she placed images on the table while weaving scraps of stories together. The first was an image of Shield (Coraza), a bronze piece that looks like a cast of the bust of a pregnant woman. On the inside, at the level of the navel, there is a stinger welded on, so that when placed on a body, in the space between the bulging bronze belly and the abdomen of the person putting on the shield, the stinger would prevent the shape of the sculpture from molding to the shape of the body. This would prevent the wearer of the armour from actually being in a protruding state of gestation”.

“On other occasions, Mar Arza has swept the page clean. Here she enters the void, her procedures and critical mechanisms don’t take on the form of judgement; on the contrary, what she does is to prepare herself to receive a form, as though she were skirting a beach made of noises, to work with its matter, to imagine, which is a genuine way of creating: what we see with the imagination, becomes. She makes the materials vibrate and sing, “sing all their elements for the power of laughter or love”, we can say that Mar Arza makes the material laugh, and in its laughter we can hear the powerful echo of other voices, those that resound in the dry touch of a sculpture, because she is not afraid to look at or cry for what has been lost”.

Anna Manubens is the director of Hangar, a centre for artistic research and production in Barcelona. Previously she has been an independent curator and producer with a preference for hybrid roles at the intersection of writing, research, programming, production support, institutional analysis and exhibitions. Until 2017 she was Head of Public Programmes at the CAPC museum of contemporary art in Bordeaux. Previously, she combined her freelance activity with teaching at the Universitat Pompeu Fabra and was a regular collaborator at the artist-run Auguste Orts (Brussels) dedicated to the production of, and consideration of artists’ films.

Mar Arza. In spite / In short / In darkness