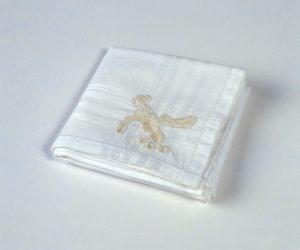 From the series Arrival at the snow (1995), I would like to present this men’s cotton handkerchief with an embroidered “stain” in silk thread.

Just as in embroideries that show the owner’s initials, this mark is the fingerprint, the traces, the signature of the “author”.

Of the ten pieces, this one contains the greatest “filial” allusion to Marcel Duchamp; the embroidery “copies” the silhouette of the little “seminal present” directly from his work Paysage Fautif (1946).

Given is the title of the work: “given” as a delivery, “given” as a loss and “given” even as a “guilty” element of a game of luck.