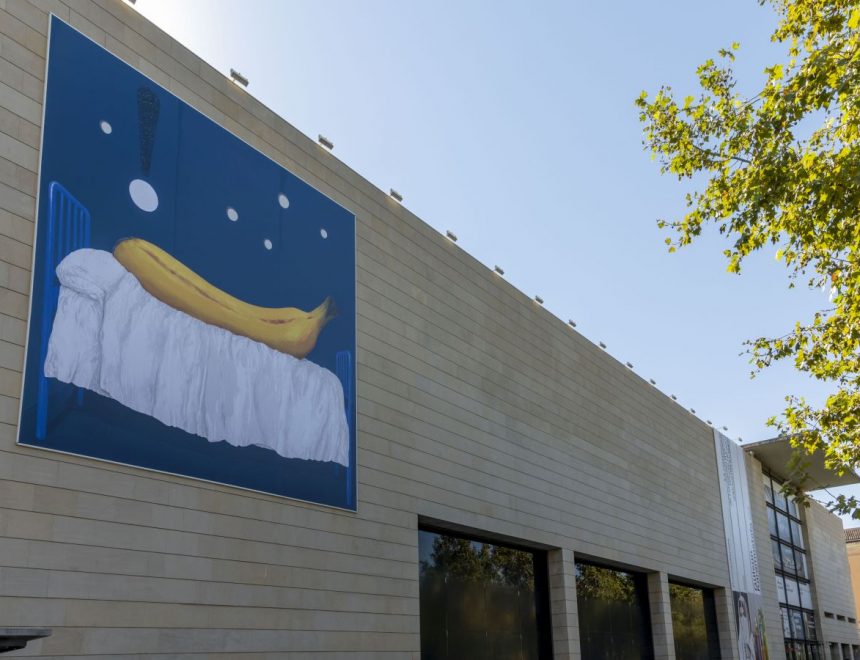 Since Magritte and Kafka, the scale of inner space has been altered, and particularly that of objects and of some of its dwellers.

Fifty years have gone by since this picture was painted. It is a kind of still life that now reappears in the format of a large hoarding. These banners for exterior display reflect one of the latest applications of the poster, developed in the early years of the 20th century.

The central figure of this painting is a banana lying on a tubular bed. A pop icon, we comfortably deduce. Bananas have not changed their appearance over time. Beds have. Mass-produced objects, their anatomy and appearance have gradually been modified under the pressure of fashion, manufacturing techniques and consumer habits.

The bed is probably the most oneiric of all the symbols in an individual’s everyday habitat. It has always been the place where human life is normally engendered, and it is there that humans are born and die. However, it is also where they nestle down and dream. Eroticism, pleasure, fear and grief are some of its inhabitants, and surging up with them are desire and frustration.

When repeated, the individual bed presupposes the formation of the mass. It is a synonym for the concentration of humans in hospitals, barracks and similar places.
Current events have brought back scenarios we thought we had left behind, expelling them definitively from our destinies. In art, however, some of us think that the option is centred on the memory, on the gravity of solid bodies, a heavy material that needs to be transformed, not forgotten.

There is also the exclamation mark. Perhaps it is an exclaiming head, a call among other marks forming a little map of constellations.
Or is it a hole where dreams slip in and vanish?