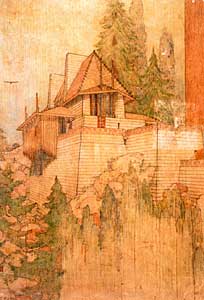 This exhibition about the American architect Frank Lloyd Wright (Richland Center, Wisconsin, 1867 – Phoenix, Arizona, 1959) is the first retrospective presented in Europe since the death, forty years ago, of this visionary artist who placed architecture in the context of modernity. The exhibition has been organised by the Vitra Design Museum, Weil am Rheim, Germany, with the assistance of Exhibitions International, New York, and The Frank Lloyd Wright Foundation, Scottsdale (Arizona). A catalogue has been published to accompany the exhibition, illustrated with reproductions of the works being shown and containing texts by experts on his work such as Jean-Louis Cohen, J. Michael Desmond and David G. De Long. The exhibition Frank Lloyd Wright and the Living City shows the architect’s vision of a rebirth of America and the planning of a living space for the future, to which he himself gave the name Broadacre City. This magnificent project follows the tradition of utopian ideas for a better world which began in the 18th century. In Broadacre City, Wright applied his ideas about organic architecture, which encompassed the design and urban planning of a whole city integrated into its natural surroundings. His proposals presented a utopian vision which reveals the influence of humanism and a visionary sense of architecture and urban planning that could activate a reordering of society and deepen its democratisation through rediscovery of nature and urban society and their interrelationship, in an attempt to overcome the contradiction between those two spheres. He followed the American tradition of dividing up the land into square sites, blocks that were to be populated evenly and controlled solely by local authorities, co-ordinated by a national government. Farms and factories, houses and work areas could co-exist in harmony and the chaotic disorder of traditional cities would disappear thanks to the development of transport and communications, which would make it possible to insert and distribute urban spaces into the natural environment. Many of the buildings designed by Wright were included in the Broadacre City project, which is presented here in a large scale model constructed especially for the exhibition, for which it provides a central focus. With its wide-ranging display of materials such as plans, drawings, photographs, models, books, furniture and decorative objects, the exhibition reconstructs Wright’s development and his fundamental contributions to modern architecture, represented by buildings characteristic of his work such as Millard House in Pasadena, California, the Kaufmann House or Fallingwater in Bear Run (Pennsylvania), the Johnson Wax Company Administration Building in Racine (Wisconsin), the First Unitarian Church in Madison (Wisconsin), the Price Tower skyscraper in Bartlesville (Oklahoma, 1953), the Larkin Building in Buffalo (New York), the Robie House in Chicago and the spiral building for the Solomon R. Guggenheim Museum in New York City, together with a hundred other designs, including some that were not constructed. These projects are grouped together according to the functions for which they were conceived: “buildings for communal work”, in which there is a rethinking of the areas in which modern work is carried out; “buildings for commerce”, including shops, banks, service stations, garages and open-air markets; “buildings for worship”, designed as places for congregation and sources of spirituality for the community; “buildings for learning”, schools and universities open to nature, with areas allowing the development of creativity; “buildings for the arts”, which include theatres, museums and multi-purpose constructions where various kinds of artistic events can be held; “buildings for recreation”, planned to exploit the advantages of the natural environment; “buildings for the community”, housing the civic services required for local community self-government; “buildings for individual dwelling”, in which he succeeded in harmonising design and materials with the setting in which they were situated; and “buildings for communal dwelling”, which include some of the apartment blocks that Wright preferred to set in locations open to the landscape, as well as hotels for temporary accommodation. Biographical Notes 1867 Frank Lloyd Wright is born in Richland Center (Wisconsin). 1886 He starts studying at the School of Civil Engineering in the University of Wisconsin. 1887 He travels to Chicago. He works as a draughtsman in Joseph Lyman Silsbee’s studio. 1888 He joins the Adler & Sullivan studio. 1893 He opens his own architecture studio in Chicago. 1903 Darwin D. Martin House in Buffalo (New York). He designs the Larkin Building in Buffalo (New York), finished in 1922. 1906 Avery Coonley House in Riverside (Illinois). 1908 Frederick C. Robie House in Chicago. 1909–1910 Voluntary exile in Europe. 1913 He starts work on the Imperial Hotel (Japan), which is not affected by the earthquake in Japan in 1923. 1915 Olive Hill Theater for Aline Barnsdall, Los Angeles. 1923 Charles E. Ennis House in Los Angeles (California). 1935 Fallingwater in Bear Run (Pennsylvania). 1937 Wingspread, Herbert P. Johnson House (Wisconsin). 1939 He publishes An Organic Architecture. 1943 He publishes An Autobiography, written in 1932 and revised in 1943. He designs the Solomon R. Guggenheim Museum, New York. 1947 First Unitarian Church, Madison (Wisconsin). Pleasantville (New York). 1948 V.C. Morris Gift Shop, San Francisco (California). 1952 H.C. Price Company Tower, Bartlesville (Oklahoma). 1954 He publishes Natural House. 1958 He publishes The Living City. 1959 He finishes the Solomon R. Guggenheim Museum in New York. He dies in Phoenix (Arizona) on 9 April.