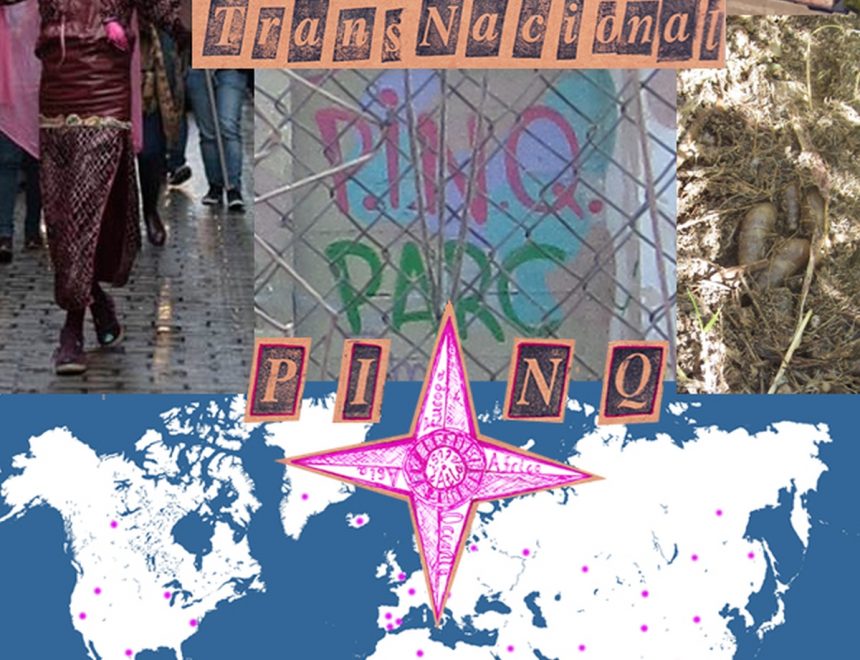 This project carried out in collaboration with La Erreria (House of Bent) involves the celebration of a series of opening ceremonies for an international network of nature reserves- called P.I.N.Q. (Post Industrial Natural Queer) Parks to protect diversity in all its forms- biological and cultural.
In the past nature conservation has often been related to conservative politics where local peoples were displaced to “clear the land” for hunting, fishing or even green holiday pursuits. Under current green washing environmental practise, huge corporations can burn acres of tropical forest to plant palm oil, a supposedly green alternative to other fuels. The PINQ Park project recognises the historical value of Europe’s abandoned lots, warehouses and factories, spaces which are like open wounds in the landscape, displaying the wreckage of our industrial past. A past which is slowly being erased by the processes of colonisation by nature.

These places are of interest to queer ecologists and during the ceremony are designated “safe” spaces, for the species which live there, for women and LGTBQI people. They should be protected, not only for the value of their industrial ruins, but because they harbour ecosystems made up of pioneer species (of plants, insects, birds,etc) which have adapted to live in these sometimes toxic circumstances.

The first P.I.N.Q. park was opened by transgender shaman Geyserbird in Valencia on the winter solstice 2013 with a participative ceremony open to the public which reclaimed an abandoned industrial site which lies between a recently created park with luxury apartments and the new Safari Park, all built on land which once would have been agricultural.

The second P.I.N.Q. Park ( Barcelona) was opened in a disused lot near the artspace Hangar on 22nd February 2014 as part of a collaboration with Davis Museum -“the smallest contemporary art museum in the world“. In this ceremony we burned a copy of the Spanish law protecting biodiversity, a law which is in extreme contrast to the aggressive urban expansion currently swallowing up what is left of the spanish countryside.