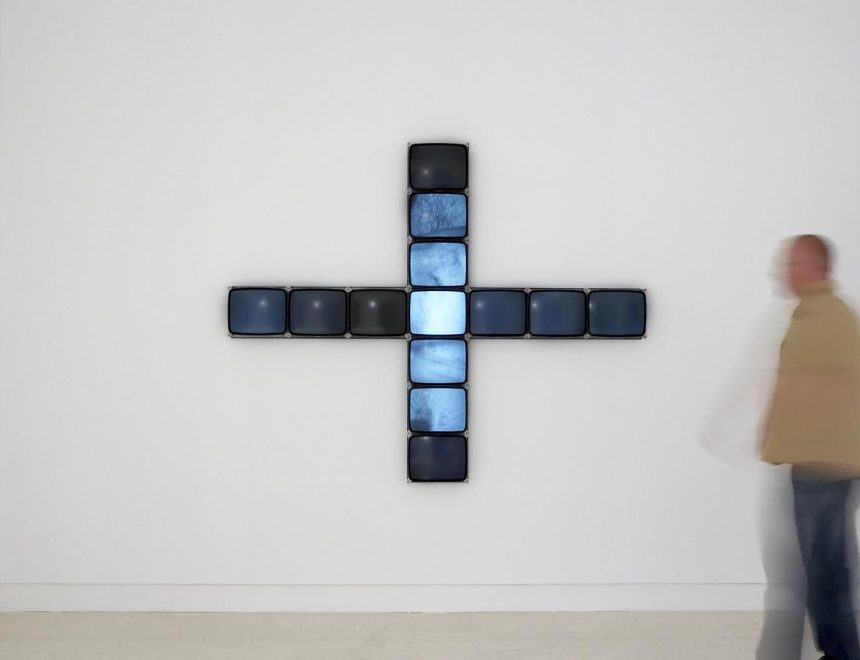 In the framework of the exhibition “Mechanical and Technical Imaginaries in the IVAM Collection“, the artist Gary Hill will give a lecture in which he will share with the audience his reflections and research on image and video.

“For quite some time I have considered the video as a kind of past event that has been subsumed by spectacle, which incorporates ever-increasing resolution, infinitely configurable massive screens, and usually pervasive sound.

Language is not the virus. The image is the virus and it doesn’t come from outer space; it’s insidious and it’s everywhere, here and now.” Gary Hill

Bio
Gary Hill (b. 1951, Santa Monica, CA) has worked with a broad range of media – including sculpture, sound, video, installation and performance – since the early 1970’s. His longtime work with intermedia continues to explore an array of issues ranging from the physicality of language, synesthesia and perceptual conundrums to ontological space and viewer interactivity.

He commissioned projects include works for the Science Museum in London and the Seattle Central Public Library in Seattle, Washington, and an installation and performance work for the Coliseum and Temple of Venus and Rome in Italy. Hill has received fellowships from the National Endowment for the Arts and the Rockefeller and Guggenheim Foundations, and has been the recipient of numerous awards and honors, most notably the Leone d’Oro Prize for Sculpture at the Venice Biennale (1995), a John D. and Catherine T. MacArthur Foundation Fellowship Award (1998), the Kurt-Schwitters-Preis (2000), and honorary doctorates from The Academy of Fine Arts Poznan, Poland (2005) and Cornish College of the Arts, Seattle, WA (2011).

Hill has also collaborated with several artists, including George Quasha and Charles Stein on the publication An Art of Limina: Gary Hill’s Works & Writings. Or in 1998 he collaborated with the choreographer Meg Stuart and her dance company Damaged Goods to produce Splayed Mind Out, which was performed over 50 times in Europe, South America and the United States.

His most recent project is a book, You Know Where I’m At and I Know Where You’re At, written in “collaboration” with the spirit of the american native Martin Cothren (1960 – 2016), and published by Dis Voir in Paris (2021).

Mechanical and Technical Imaginaries in the IVAM Collection