The French artist Christian Boltanski will be awarded the 14th Julio González International Award on the 26th of March, at 12:00pm at the IVAM. The secretary of Culture and Sports of the Comunitat Valenciana, Julia Climent, will present the award to Boltanski in recognition of his work on plastic arts and his contribution to modern art. The Julio González Award is especially significant not only due to its international focus, but also because of the piece that is given to the awarded artist: an edition of a figure by Julio González, Woman with amphora II, made of molten bronze with silver patina from a bronze model cut and crafted manually, which belongs to the IVAM.

After the Awards Ceremony, at 7:30pm Christian Boltanski will talk to the director of IVAM, José Miguel G. Cortés, at a round table open to the public. During this talk, the French artist will unravel the fundamental aspects of his work and his next year’s project at the IVAM.

Boltanski’s work, in its different expressive facets, has had a very special presence in Valencia. One of his most significant works, ‘La Réserve des Suisses Morts’ (1991), a great installation that has been exhibited on numerous occasions in international museums, is part of the IVAM’s Collection. Memory, Loss, and Death are some of the main themes developed by Christian Boltanski, one of the most important plastic artists alive from France. All of those aspects will be portrayed in the exhibition that will take place, on the occasion of the Julio González International Award, at the gallery 1 of IVAM on the last trimester of 2016. 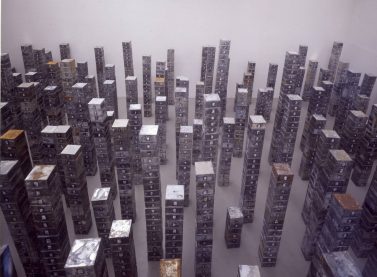