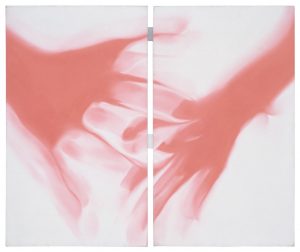 “I should say that I admit to only five hard-core Pop artists in New York […]. They all employ more or less hard-edge, commercial techniques and colours to convey their unmistakably popular, representational images, but what they do stylistically with these characteristics is not necessarily similar. The New York five […] are: Andy Warhol, Roy Lichtenstein, Tom Wesselmann, James Rosenquist and Claes Oldenburg”. The American art critic Lucy Lippard expressed herself in such a forceful way in her seminal book Pop Art, published in 1966, about the artists associated with pop art in the American city.

James Rosenquist (one of “the five”), is the author of the mechanised diptych Red Applause, which is part of the IVAM collection along with four more works. Painted, as the artist himself states, with the method he learned as a commercial – billboard – painter, Red Applause introduces a great novelty: motion in painting. The work exactly reproduces its title, a red applause, and needs a mechanism powered by a 220V engine to move the two canvases of which it is made up.

Rosenquist’s decision to use popular techniques and themes was more than just an appropriation of ad paint. It was a matter of choice, a new basis for making art. Trained at the University of Minnesota and the Art Student’s League in New York, during the years he was working as a billboard painter, he always distinguished between his commercial work and his study practice. Nevertheless, this distinction was never strict or permanent, painting billboards gave him the opportunity to see an enormous composition displayed, and the possibility of investigating the textures of pictorial surfaces. And in Red Applause, he added movement, which is essential when trying to visualise the action of applauding, and puts the work in relation to another, also in the IVAM collection: The Critic Laughs, by Richard Hamilton, who also uses an engine to express laughter, in this case an electric toothbrush.