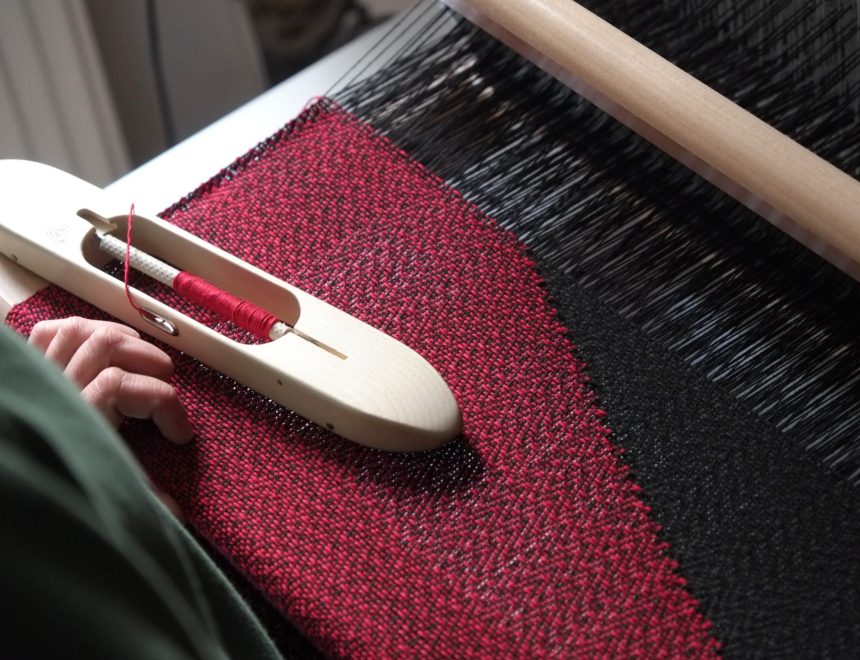 Part of the exhibition Anni and Josef Albers. Art and life, we have invited artist Andrea Canepa to hold a talk with the work of Anni Albers, the result is a specific piece, On weaving, which can be seen in the hall at IVAM

“I love the idea of writing with threads, of reading by touch. When humans began to write, language – which, at the time, only existed in our body (our mind, our voice) – acquired a separate existence as an artefact, as an abstraction. I think about the material nature of paper and how ink doesn’t alter its structure. I think about information stored digitally, and about how its material support is almost irrelevant: the same data can be stored nowadays on a chip, yesterday on a magnetic tape and before that on punch card. I imagine writing with threads as a way of anchoring the language of the material world, giving it a single body that it can no longer be separated from, because the structure that shapes the fabric is the information on it.

The piece On Weaving is part of that desire to write with threads. To do this, I use the connection between the history of textiles and the history of computing. The art of weaving is a mathematical question, it is about understanding patterns and structures. Weaving is the original binary system: warp and weft, passing over and under translate easily into on and off, ones and zeros. In this piece, the characters of the alphabet are transferred to a textile pattern based on binary code to transcribe the first chapter of the book On Weaving by artist Anni Albers.” Andrea Canepa

Andrea Canepa (Lima-1980) began her studies in Fine Arts at the Catholic University of Peru and completed them at the Polytechnic University of Valencia, where she graduated with a master’s degree in Visual Arts and Multimedia. In 2020, she received a research grant from the Senate Department for Culture and Europe in Berlin. In 2014, she received the ARCO Community of Madrid Award for Young Artists and the Miquel Casablancas Award; in 2013, she won the Generaciones Award and the Endesa Grant for Plastic Arts in Spain. She has worked as an artist in residence at Gasworks- UK, MATADERO – Spain, Cité des Arts – France, Tokyo Wonder Site –Japan, Beta Local- Puerto Rico, Bauhaus Master’s Houses– Germany, Jan Van Eyck Academie – Holland and at the Spanish Academy in Rome – Italy. Her works form part of collection such as CA2M, IVAM, the Provincial Museum of Teruel, and of Foundations such as Endesa, Montemadrid, DKV and Inelcom (Spain), Bauhaus Dessau Foundation (Germany) and MASM (Peru).

Part of the Anni and Josef Albers exhibition. Art and life