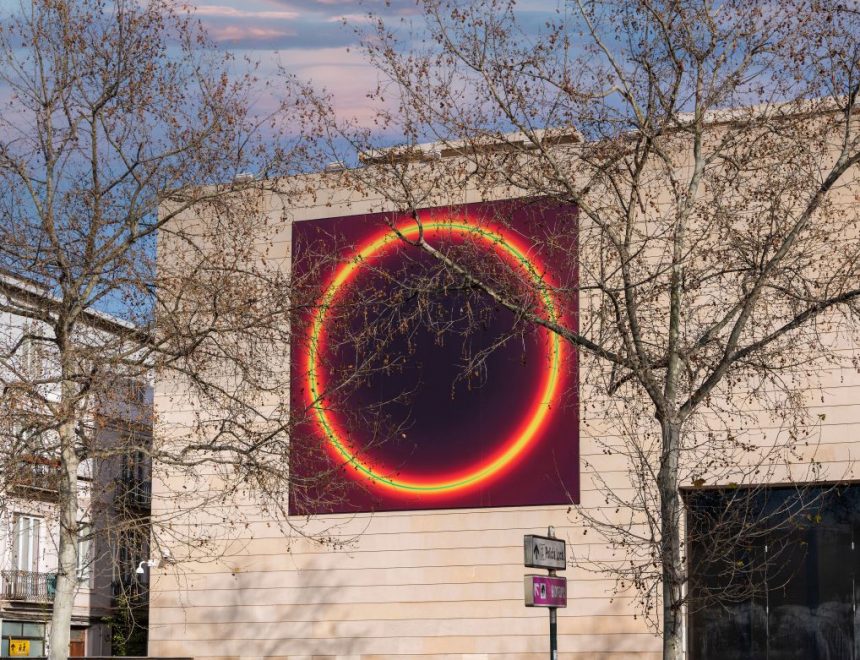 This work entitled Hathor, which takes its name from an Egyptian goddess, belongs to Enso, a pictorial series characterised by the representation of circular forms, which I have been working on since 2015. With infinite nuances, the circle and its three-dimensional extension, the sphere, are a part of nature and of every culture in which nature retains its magical transcendence. Both symbolise perfection and its effects, like the cosmic heavens or their cyclical movements.

The ancient Greeks drew a distinction between “figure”, that which is seen and perceived, and the invisible “form”, which is captured with the mind: the Platonic eidos, the idea, notion, space, genre, etc. In Greek, the term “idea” comes from the verb eidon, meaning “to see”. In western culture, pictorial form as an expressive artistic element has permitted us to attain what we call abstraction, understood as an absolutely logical mental development.

For a long time, I worked around the idea of wholeness and nothingness, dissolving geometric structures from earlier phases. I explored Zen thought on the basis of the maxim: “Form is emptiness, emptiness is form”, which perhaps leads us further. In its most emotive and organic sense, I regard this form, together with colour, as the essential condition for transcending entropy, which is akin to saying “flowing with life”. Fascinated by the painting characteristic of Zen Buddhism, and especially its vision of emptiness, I investigated the concept of enso (circle in Japanese) owing to the symbolism of infinity it projects and its goal of freeing the mind to reach the essential. It also implies a component of deliberate imperfection, almost a necessity, which makes change and transcendence possible.

Enso is a mode of illumination, a spiritual exercise, symbolising the universe, emptiness, infinity… My approach to this concept is subjective and relative, since I belong to western culture. From it I express myself, and through it I seek the mystic and sacred values that are common to all human beings and present in all cultures. With its immense simplicity, greater even than that of a haiku, the enso represents for me the imperfect perfection of the present moment.