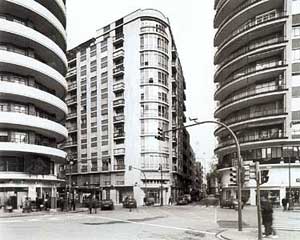 Gabriele Basilico (Milan 1944) is one of the best-known documentary photographers in Europe. The field in which he works is the city and industrial landscape. An architect by training, he works as an architectural photographer for the publishing sector, industry, and public and private institutions. In 1984—85 he participated in the Mission Photographique de la DATAR, promoted by the French government to document the transformation of the contemporary landscape. He has subsequently been invited to take part in similar initiatives in various countries in Europe: Italy, France, Holland, Germany, Switzerland, Austria and Portugal. In 1990 he was awarded the Prix Mois de la Photo for the exhibition Porti di mare. In 1994 the Fondazione Galleria Gottardo in Lugano devoted an extensive retrospective to him, L’esperienza dei luoghi, 1979—83, which travelled to the principal museums in Europe. In 1996 he was also awarded the Osella d’Oro prize for photography of contemporary architecture at the sixth Mostra Internazionale di Architettura della Biennale di Venezia. At the end of 1999 he carried out his latest project, Cityscapes, which was presented in his native city and subsequently toured the main museums in Europe during the year 2000. The exhibition offers a survey of his most representative works and his latest output, which has not previously been shown.